In it Macchio’s character, Daniel LaRusso, is the good guy, and definitely the underdog. He’s the new kid in school, has few friends, and keeps getting beat up. The karate teacher, or sensei that Daniel pairs up with, Mr. Miyagi, believes karate techniques should be for self-defense only.  And can lead, ultimately, he suggests, to a path of inner peace.

Zabka’s character, Johnny Lawrence, is the bully nemesis, the bad guy. He’s a member of the rough and tumble Cobra Kai dojo. A group that lives by a simple code.

The film centers on a narrative of who, or what, is the greatest.

Karate Kid ends with a final match between the rivals for the All Valley championship. With the score tied 2-2 Daniel, leg injured and barely able to stand, assumes the memorable “crane” stance. Hands up, hurt leg lifted, he executes a front kick to Johnny’s face, scoring the tournament-winning point. 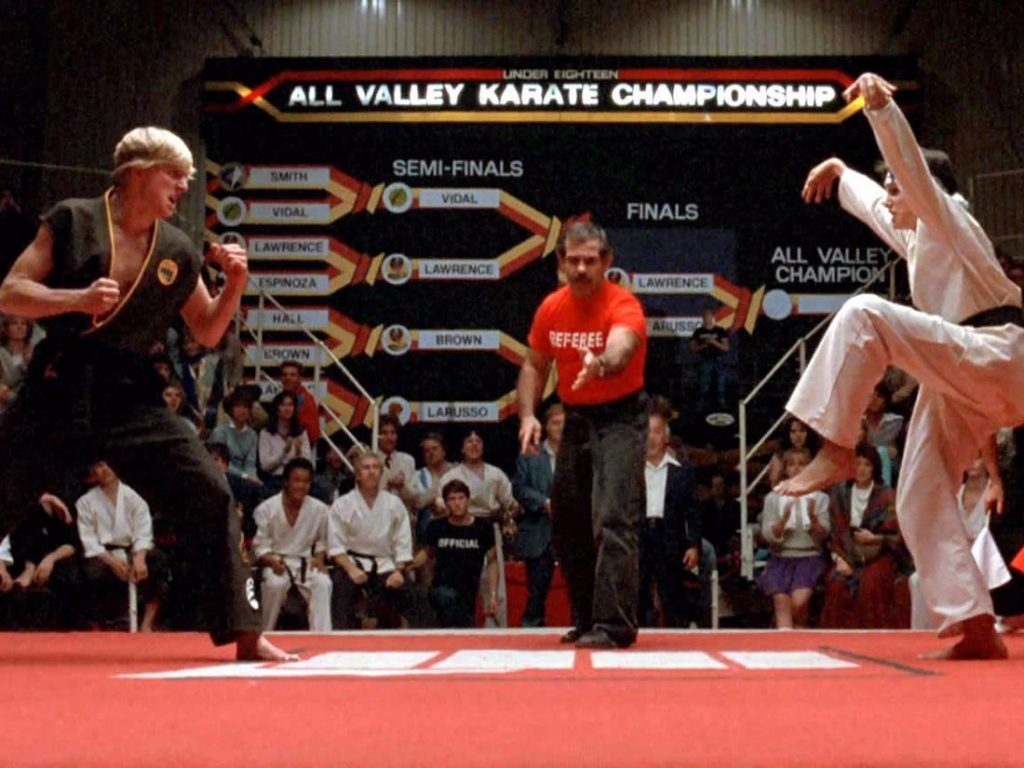 It’s a classic good-vs-evil 80s flick, beautiful in its simplicity. Good triumphs over evil. The bad guys get their just desserts. Justice is served.

The GreatestThe backstory from today’s text also has some controversy. Earlier in chapter 18, the disciples find themselves asking Jesus a question: Who is the greatest in the kingdom of heaven?

Perhaps they too were trying to figure out some sort of pecking order.

Who is the greatest –Is it Peter or Philip?James or John?Judas or Jude?

Their spars likely didn’t involve too many kicks to the face. Tho I bet they debated this question mightily.

As a band of brothers, it shouldn’t have even been a topic. The disciples had the same sensei, after all. There would be no karate match to settle this dispute.

Instead of answering the question directly – hey Peter, you’re it – Jesus calls over a child as an example. Unless you change and become like a child, Christ says, you’ll never fully experience this thing called heaven. For whoever becomes humble, like this child, it is they who are greatest in my realm.

The disciples couldn’t have seen that coming. Looking to figure out who’s number one Jesus called over a little kid? And tells them to be humble, like a child?

Where’s the competition to settle this, once and for all?

Filled with pride and ego, the disciples, and their very human desire to dominate one another, had much to ponder.

Cobra KaiLast week my wife and I stumbled on this phenomenal follow up to Karate Kid, a series called Cobra Kai. It continues the storyline of Daniel and Johnny, three decades later. It’s a machismo soap opera, set to a 1980s soundtrack with a healthy dose of nostalgia. Aka wonderful. Check it out on Netflix if you’re curious.

In it, Daniel, now in his early 50s, owns a successful car dealership; every customer gets a free bonzai tree. He lives in a big house, and is happily married with two well-adjusted kids. For him life is good.

Johnny’s path over this time yielded a different result. He’s a handyman who can’t keep a job. Lives in a small apartment. Is Divorced. A deadbeat dad. And he likes to drink a little too much.

Initially, it seems the good and evil binary for the two characters still holds true. One where the good guy prospers, the bad guy just can’t seem to pull it together.

Yet as the Cobra Kai storyline develops both characters become more nuanced.

First Johnny saves a high school kid from getting beat up, and later agrees to help him learn karate. He then starts his own dojo, which attracts local high school kids that are bullied. Johnny wants this dojo to be different than the one he trained in as a youth. Slowly you find yourself rooting for Johnny to change.

Daniel learns of the new Cobra Kai dojo and basically loses his mind. “Not them, I know what they stand for!” he says. “They’ll never change!” So Daniel starts his own karate team, complete with those great wax-on, wax off techniques of old. But in the process, he forgoes his day job and car dealership. As a result, his marriage begins to suffer.

We learn there is no completely good guy. There is no fully bad guy. Both have good qualities. Both have flaws. They are human, after all.

At the heart of this story is their rivalry, 34 years in the making. Often it doesn’t seem like the rivalry will ever end. But it almost does. Twice.

In one scene Daniel and Johnny go out for a drink, soon realizing how much they have in common. Both grew up without a good father. Both were bullied. They begin to bond. Forgiveness, over past wrongs, begins. But then a plot twist and boom, the seeds of forgiveness go dormant. The two become bitter rivals again.

In another scene, Daniel and Johnny end up on an impromptu double date, and bonding begins anew. They’re smiling, reminiscing, laughing, even shaking hands. Could they become friends? The possibility of forgiveness, and reconciliation in that moment is palpable. But then another plot twist, and there they go, back to the same old spats. Opportunity lost, once more.

The more you watch the more you wonder – will the two ever fully forgive? Will they finally be able to move on? Is a peaceful existence for them even possible? Stay tuned for the next season. But for now? The rivalry lives on.

ForgivenessAfter all the disciple’s infighting over who was greatest, there couldn’t help but be some tension among the 12.

For the competitive spirit, among them, about who was the greatest, never fully went away.

With this backdrop, Peter realizes something has to give. After enough of the same old same old arguments, he decides it’s time to move on. Forgiveness is in order. And he wants, ultimately, to do it right.

So Peter asks Jesus a question. If someone sins against me, how often should I forgive? Up to seven times?

At first blush that sounds like a good number. It’s a complete number. A perfect number. Peter knew Jewish teachings; extend forgiveness no more than three times, and you’re good. But Jesus spoke so much about forgiveness the number must be more now, he thought.

Surely adding four more to the three would be enough. Right?

Jesus responds with a much higher metric, seventy-seven, or in some translations seventy times seven. Which is a heckuva lot more than Peter’s first guess.

When may we stop forgiving those who offend us repeatedly? For Christians, the answer is crystal clear: never.

For God is a God who forgives completely.To model Christ, we are called to do the same.

When it comes to forgiveness try keeping those numbers top of mind.

UnforgivenessTo drive home the point Jesus tells a parable. And it’s downright absurd; an ancient soap opera, in it’s own way, if you will. A king looked to settle accounts with his people. One person owed an unimaginable amount. The amount was so much it would take them over 30,000 years of labor to pay it back. Which is impossible. Having pity on him, the king forgave the entire debt. That’s a lot of forgiveness.

The man who had just been forgiven such a large sum then came upon another debtor. One who owed him about 100 days of labor. The forgiven man took the debtor by the throat and demanded payment. The debtor begged for mercy, but was refused, and put in prison.

When the king heard this, he sent for the forgiven man. “I wrote off the debt because you pleaded with me. Why did you not have mercy on another that owed so little, as I had mercy on you?” The king then banished the man from the kingdom, until his debt had been fully repaid.

To be clear, it is never the king’s desire to punish the one he forgave. Nor is it God’s desire to punish us. Comparing 30,000 years of debt to 100 days, with the former forgiven, while the latter is not, is an absurd tale. A tale designed to drive home a point.

Just as we have been forgiven so very much.

True GreatnessWe love our rivalries, don’t we? Our culture is practically built around them. Daily we compare ourselves, and the groups we identify with, to others. Sometimes banter about who is the greatest is harmless, even fun.

The greatest burger in Ames? Café Baudelaire. Change my mind.

The greatest college football team in Iowa? Sorry Hawkeye fans, but I’ve got a bold prediction: the Cyclones will win more football games this year. I personally guarantee it.