Growing up I always loved numbers. That’s the 0, 1, 2, 3 variety – not the book of the bible – which as a kid can be tough to get through in spots. Numbers lead to counting, and counting goes from one thing initially to multiples things soon after. And before you know it things become groups and groups get compared to all sorts of other things and off you go.

We’re taught to make comparisons at an early age. It’s been fun to watch my two children, ages 10 and 6, learn the same lessons I did as a child.

Sally has four apples. Bobby have five. Who has more?

Which leads to other comparisons down the road.

The US produces 19 trillion dollars of gross domestic product, or GDP, a year. Japan’s GDP is 5 trillion. Who has more wealth?

Early on it’s simple. Bobby has more apples. The US has more wealth.

Sally has six oranges. Bobby has four. Who has more?

When you combine comparisons, well, that’s when things get really interesting.

Bobby has more apples, and Sally has more oranges. Who has more fruit? Sally wins that one, 10 to 9.

The US has a higher GDP, tho Japan’s life expectancy is higher than ours. Which people have a higher quality of life? Good luck deciding that one.

The math they used was simple enough. Follow the laws of God and you’re good.

Honor your father and mother.Keep the sabbath holy.Don’t lie. Or cheat. Or steal.

Bobby follows religious laws. Sally doesn’t. We know because people have been keeping score, tallying up points as they go. Which is doing the will of God?

All this left a fairly clear who’s who grouping.

With the pious, the religious, the self-righteous on one side. And everyone else on the other. In the eyes of the religious leaders, this distinction was crystal clear. 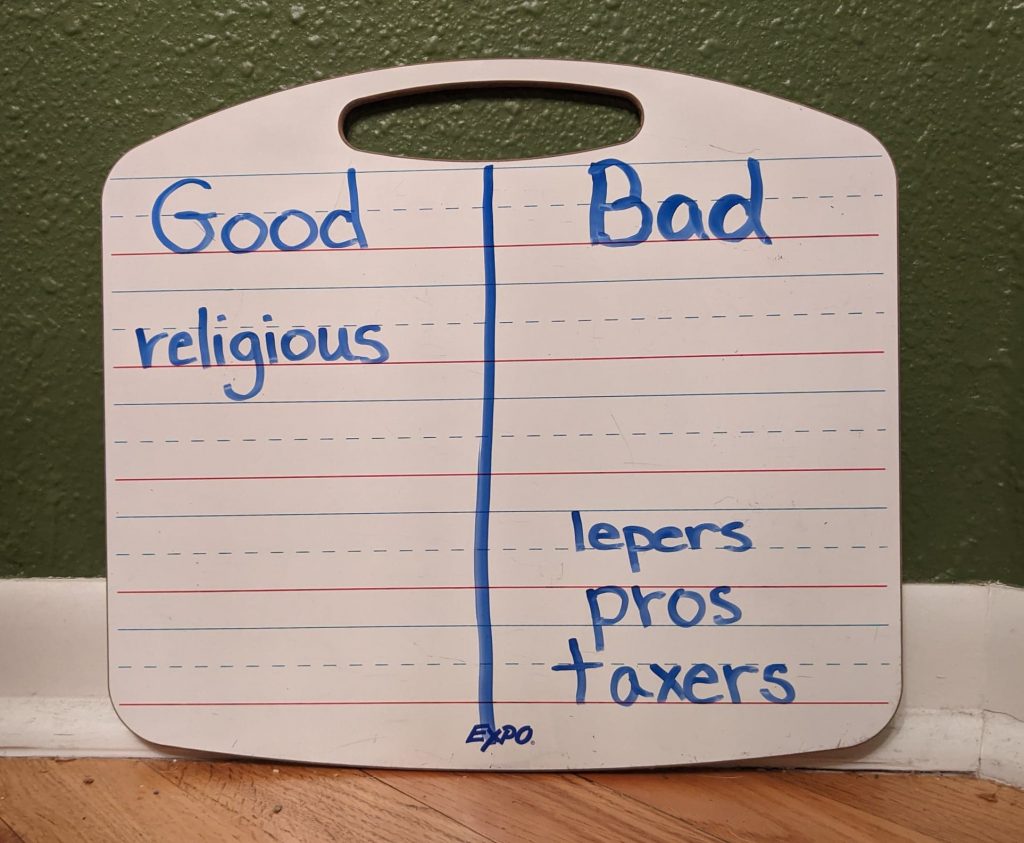 Calculations were complete. Groups were made. That was that.

Next LevelWhen Jesus enters the scene things get, well, more complex. He too makes a basic comparison.

The comparison was so straight forward it may just have been a rhetorical question. Jesus starts by saying four little words: what do you think?

With it he invites response. With perhaps an obvious answer to come.

A man had two sons, Christ begins. He went to the first and asked him to work in the vineyard that day. The son initially said no. But later changed his mind, and went. The man then went to the second son with the same question. Sure thing, the son replied. But he did not go.

Which of the two did the will of the father? What do you think?

What do you think?

The religious leaders he queried must have felt the same.

Instead, they replied, without hesitation. “The first.” The son that said he wouldn’t go, but later did. They had answered correctly.

But there was more to Jesus’ simple question. It went beyond a duh, come on, or obviously. And those pious religious leaders had completely missed it.

For they were operating with just one variable.What people do with all those laws.And only two groups.

In their eyes one was clearly righteous, the other clearly not.

Jesus’ parable went beyond that.

With it he’d expanded their universe by adding one variable more.

What you say you’ll do. And what you actually do.

To geek out, just a bit, we could even put it on a two by two grid. With what you say you’ll do on one axis, and what you actually do on the other.

If your yes is always yes, group one.And if your no is always no, group four it is.

Christ’s parable is about the other two groups.

These categories have nuance. They infer change. Transformation. A difference between intent, and action. And movement, in this silly little grid, from one category to the next.

People like –• Lepers, physically unclean, cast out of the city.• Tax collectors, like Zacchaeus, that wee little man, that wee little man was he…who took more money from people than he should.• Prostitutes, whose profession left them outside traditional societal norms.

And based on that, according to the pious things didn’t look that different. 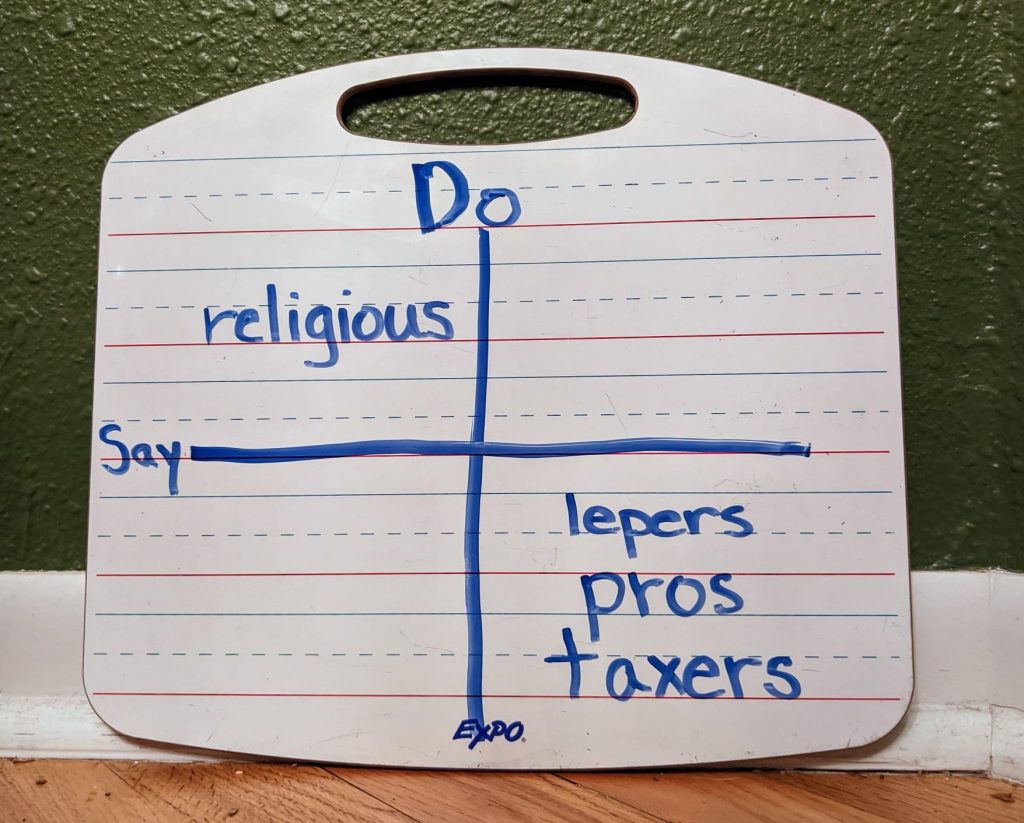 TransformationYet Jesus healed lepers. Making them clean. Enabling them to rejoin their communities, once again. And they believed.

When Zacchaeus, a noted crook, gives half his possessions to the poor, and repaid those he defrauded, four-fold, Jesus announces salvation to his house.

When John the Baptist encountered prostitutes he baptized them, offering forgiveness of sins. And they too believed.

Of the four women mentioned in Matthew’s presentation of Jesus’ genealogy, two – Tamar and Rahab – are noted prostitutes in the Hebrew bible. The path to Christ, and of Christ, is sometimes messier than we first might assume.

And the pious religious leaders who said they followed the father? And thought they had been? Jesus had some surprising news. Some had not changed their minds. Some had not believed.

Their standing, and the standing of so many they’d judged, was not what it seemed. 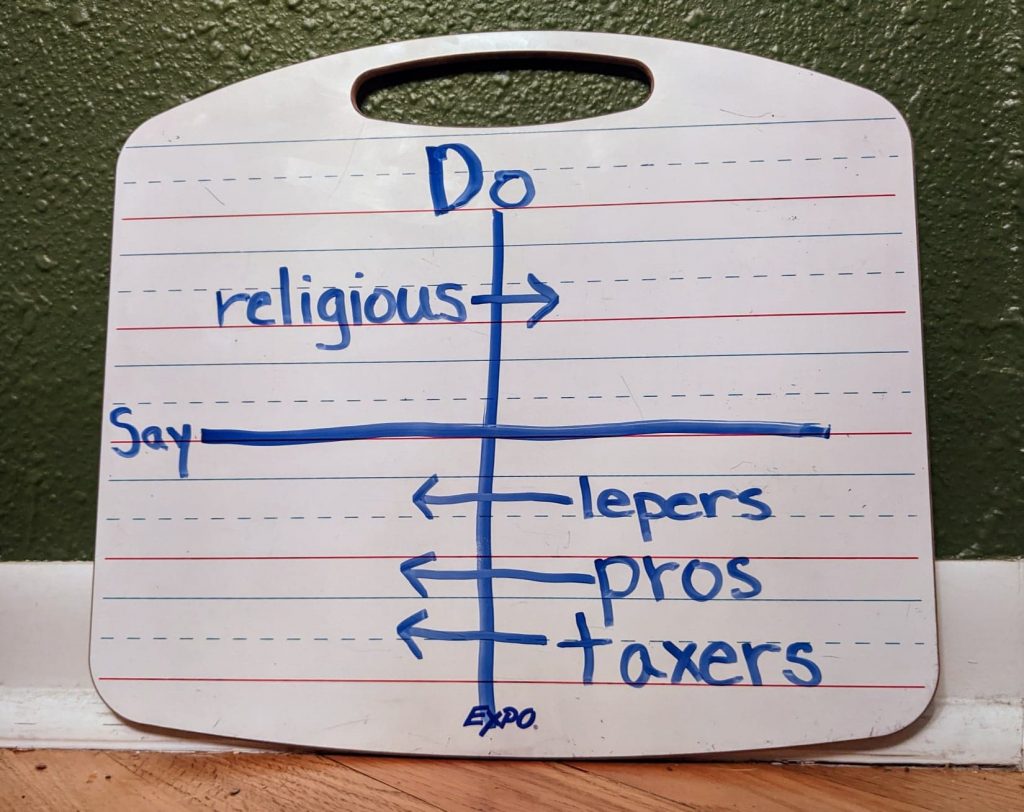 Once again Jesus had turned the tables on the cultural elite.

The last had become first.The lowly made high.With salvation now offered not for some, but all.

The expansion of who could access God’s kingdom, through the life, death, and resurrection of Jesus, had begun.

CloseNumbers. They run our world, don’t they? From what’s in our bank account, to how long we live. They serve as the metric by which we compare so very much.Yet when we use them to count past wrongs, and create groups, who follows the rules most, and who doesn’t, lifting some up, putting others down, we all lose.

Sometimes labels get applied to people like Bobby and Sally, at a very young age. And those labels can cause very real harm.

For we forget that each of us follow the ways of Christ sometimes, while other times we don’t. We all fall short on occasion. We are only human, after all.

Today’s text reminds us that transformation is possible, for anyone. Reminds us we’re all infinitely more complicated than a simple binary grouping or label contains. And reminds us that there aren’t two, or four, or eight or any other number of groups when it comes to our access to the divine.

For full and complete access, to the kingdom of God, which our Lord desires for each of us, follow Christ by doing this one thing, which erases all the rest of what we’ve ever done.  And then asks just this. 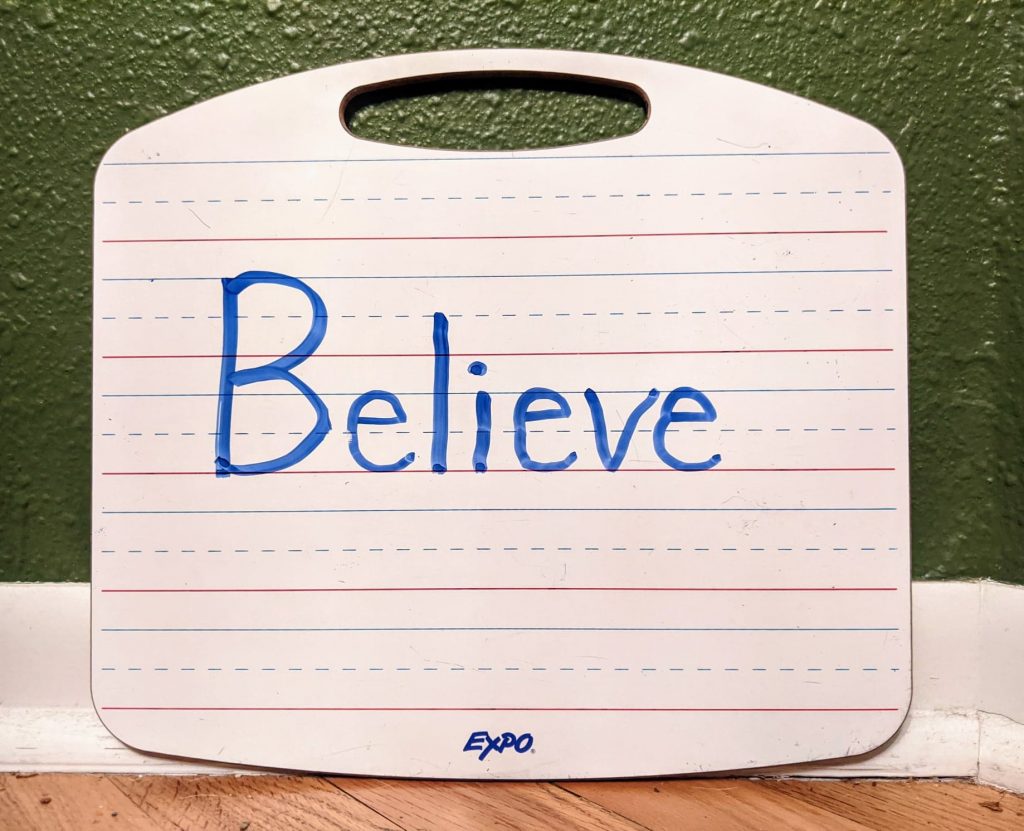