The report about young Thomas wasn’t the kind any parent wants to see. Tom was considered a poor student by his school. He had difficulties with focus. He was easily confused. In school only for a few months, already he’d been labeled a problem child. Labels like this, applied to someone so young, can be tough to shake. He’d been judged, and written off, seemingly not up to the task of learning alongside his peers.

When mom Nancy heard what was being said about Tom, she was furious. Determined that this early assessment wouldn’t define her son for life she decided to teach him at home. But it wouldn’t be easy. For Tom was the youngest of seven. Nancy’s daily routine was hectic already. A busy household was about to get busier. She wondered how it would all turn out.

BenJosiah and Abiah were broke; there was no way around it. They wanted the best for young Ben, but times were tough. Ben was one of seventeen kids; that’s a lot of mouths to feed. After only two years of school, they simply couldn’t afford for him to go back. They thought he’d make a great minister. If only they had more money.

But they didn’t, so Ben dropped out of school to work for his dad. Formal education now complete, at age 10, Ben’s learning would have to be self-led. Future prospects for the boy, by any objective standard, weren’t good. Labels, like being poor and uneducated, can pigeonhole a person. His parents prayed it would work out. Truth be told they weren’t quite sure.

RodRod’s life was destined to be difficult. An African American and born without a tibia in either leg – that’s the shinbone – both of Rod’s legs were amputated above the knee before he turned two. Rod’s mom had a job with modest income. To afford the pricey prosthetic legs her son needed she quit it, and filed for unemployment. It was the only way her son could get the medical care he needed.

As Rod grew his legs needed to grow with him. New sockets, new feet, new knees, all required annual updates. It was tough for Rod’s mom to maintain his complicated care and still pay the bills. Soon the two found themselves without a place to live, moving in and out of shelters over the course of five years.

The unkind labels people applied to them, words like homeless, disabled, unemployed placed limits on what their lives could be. She loved her son. She was doing the best she could. She hoped it would be enough.

The SonLife for Mary, up until then, was non-descript. Her basic needs growing up were met; she’d been loved, fed, clothed, housed. Even better, Mary was engaged to be married. Culturally at the time this meant her financial prospects were good. Lifelong security, for her and her family, were in reach.

But then some surprising news, courtesy of a messenger from above. She was pregnant, the messenger shared, and would bear a son. And this child would be holy, a king, and rule forever more. Mary was confused, perplexed, afraid. She wondered aloud, “how could this be?”

Much has been made of her chaste status. While that was part of Mary’s question there was more to it. For this news cast uncertainty on everything Mary thought she knew. And created all sorts of related questions.

Unwed mother was a label Mary would prefer to avoid. In her day especially it would come with enormous cost.

And then the bigger question. How could a child, borne from such circumstance, go on to save the world?

Tom reduxGetting back to young Tom and his school problems, it turns out he learned just fine with mom teaching at home. Reading, writing, arithmetic all came naturally. A self-directed learner, he was fascinated with technology, spending hours, then days on experiments he’d dreamed up.

And before you know it Thomas Edison was inventing all sorts of things, from the phonograph to the motion picture camera to the light bulb. They are technologies we rely on to this day.

The labels of confused and unable to think clearly didn’t end up meaning much at all. For Tom was busy making the impossible, possible. Over and over again.

Ben reduxAfter working for his family, young Ben moved to Philadelphia, where he launched multiple careers. He was a scientist, inventing bifocals, the lightening rod, a flexible catheter. He was a postmaster, ensuring people could send and receive mail. And he was a writer, penning an almanac, his own biography, and writing advocating for the end of slavery.

Growing up poor, with no education, many might conclude Ben wouldn’t amount to much. But the world was his classroom, and he earned quite a living learning from it. Benjamin Franklin spent a lifetime doing the impossible, in so many ways, helping birth a nation.

Rod reduxAs a ten-year-old Rod was still homeless, but his fortunes were about to change. By chance he connected with the Challenged Athletes Foundation, and found a coach who offered to teach him to swim. Teaching turned to training towards a goal. Rod’s efforts paid off. In 2014 he made the U.S. Para swimming team, and went on to win both gold and bronze medals in the international competition.

Rod then set his sights on triathlons, becoming a skilled runner and biker along the way. He started with small, local races, building up the miles to try longer events.

Then in October 2019, after years of training Rod hit a major milestone. He completed an Ironman competition in Hawaii, successfully swimming 2.4 miles, biking 112 miles and running 26.2 miles. That’s over 140 miles of racing done in a day. He was the first bilateral above-the-knee amputee to ever do it. Rod’s motto? No legs, no limits.

Turns out the labels of homeless and legless haven’t slowed Rod Sewell down one bit. Which is what happens when you’re busy making history, inspiring countless others along the way. 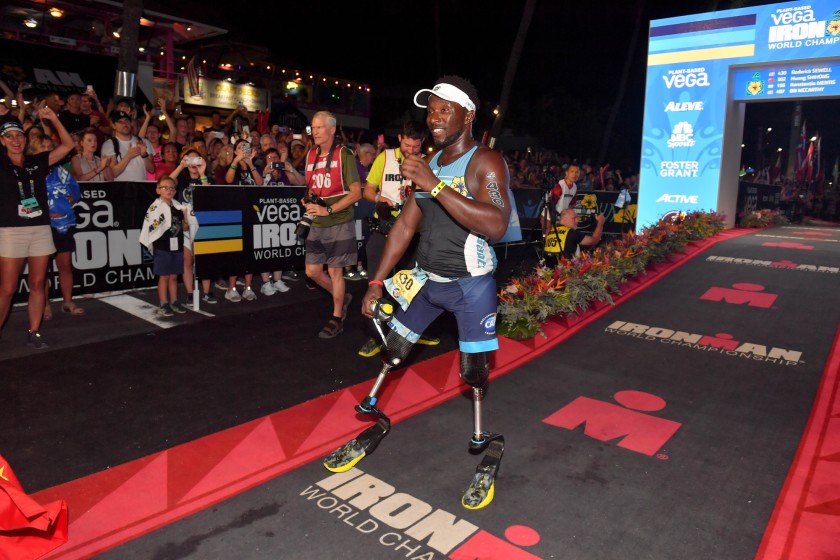 “Here I am,” Mary told the messenger. “Let it be, according to your word.” And so it was.For the rest of the story, tune in December 24. And keep on tuning in after. For the stories of Mary’s baby offer a lifetime of lessons we learn from still.

CloseOur world has been a bit sadder this year than normal. To quote an internet meme, change my mind. There’s no way around it. No need to expound.

As the birth of Christ is heralded, and presents purchased, sermons preached, songs sung, like Mary, we’re offered the chance to proclaim this exciting news.

We want peace on earth, goodwill toward all. We want to be part of a world being transformed as God intends.

Like Mary we come with our own questions. We have our own versions of how can this be?

How can darkness be vanquished?How can wrongs be made right?How can the many become one?

In these moments, let us be reminded of the message from above.

With God, nothing is impossible.

Etch it into your soul.Write it on your heart.

In these moments let us mirror Mary, birthing God’s kingdom here on earth.

In these moments let us echo Mary. Here I am Lord. Help me to take part in healing this world you love so. May it soon be. Amen.